Most of the time I get my recipes by adapting them from other sources and then other times they’re just a matter of necessity. This recipe came about because we got beets in our Full Circle bag a few weeks ago and I wanted to do something interesting with them. I’ve had beet salads a few times when out to eat, so I thought I’d try to create one myself at home.

I would recommend using fresh beets for this recipe.  I tried making the salad again with pickled beets and it just wasn’t as good.  Roasting beets is pretty easy.  Preheat the oven and wash the beets. Cut off the greens and stems.  If they are large beets, wrap them individually in foil.  Otherwise, wrap several smaller beets of similar size in foil.  Put the wrapped beets on a cookie sheet and roast 50-60 minutes, or until they are fork tender. You can do all of this up to a day ahead of time.This salad is best served at room temperature or chilled, so just plan accordingly. When ready to use the beets, hold a beet in a paper towel and rub to get the peel off.

Heat a skillet on medium and add 1 teaspoon of olive oil. Add the cauliflower and season lightly with salt and pepper.  Brown on both sides.  The pieces I had took about 5 minutes per side.  Yours may take longer, depending on the size.

Once the cauliflower is browned, take it out of the skillet.  While it’s cooling, cut the roasted and peeled beets into bite-sized pieces.

To make the vinaigrette put the orange juice, champagne vinegar, olive oil and salt in a jar.  Shake vigorously to mix.  You can also whisk the mixture together.  Put the beets in a bowl and toss with the vinaigrette.

Coarsely chop the Marcona almonds.  I like to keep them in big chunks, so they can easily fit on a fork.  I also like the chunks big enough to add some crunch. Then thinly slice the Shallot.  Since Shallots have a fairly strong flavor, you want them thinly sliced so each bite isn’t over-powered by onion flavor.

Now you’re ready to assemble the salads.  First, put a cauliflower steak in the center of each plate. Then place the beets on top of the cauliflower- make sure to scatter them so they aren’t all in  a huge pile. Crumble a tablespoon of goat cheese on top of each plate.  Scatter the almonds and shallots on top and finish with a drizzle of the vinaigrette left in the bowl the beets were in.  Add salt if you need it. 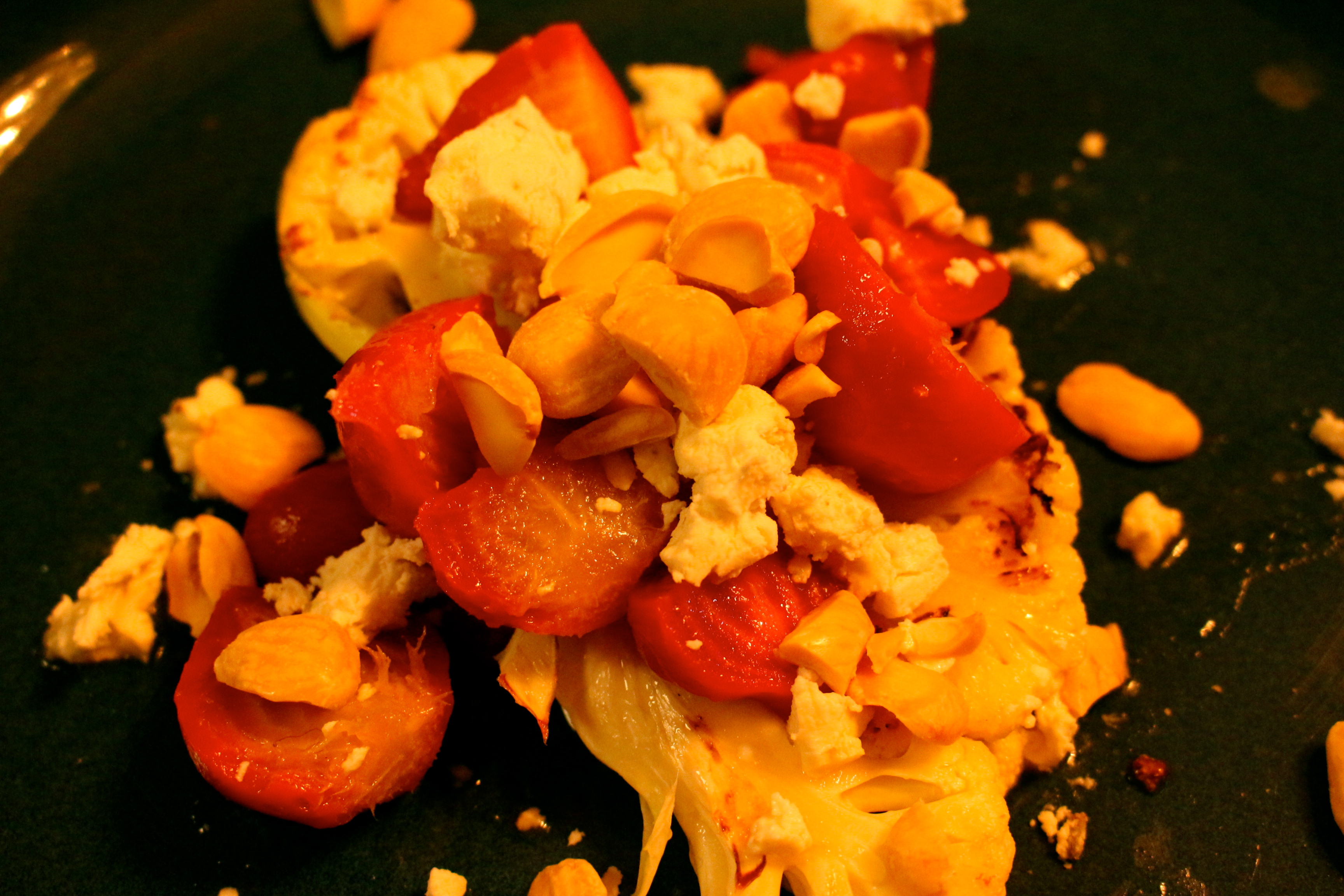